I have stayed relatively hopeful up until this last week. People are showing a serious lapse in character and judgement.

I started getting the sense of the simmering right-wing outrage over stay-in-shelter orders in state-after-state probably in March.

Maybe I should’ve realized it earlier considering how much Fox News, Rush Limbaugh, and the right-wing’s Dear Leader, himself, belittled the Coronavirus outbreak back in February.

You see, in right-wing fantasyland, Dear Leader is good. Dear Leader can do no wrong. Even if Dear Leader does exactly what they once ridiculed or despised, they will support Dear Leader until the end.

And that’s because Dear Leader is on their side.

Plus, he’s so awesome at owning the libs.

There’s a virus that’s killed over two-thousand of our fellow Michiganders. Thousands more are in the hospital. Doctors and nurses are working around the clock with some of them lacking the necessary equipment to protect themselves against the virus.

We’re part of a world pandemic. No, not a Michigan pandemic. A WORLD pandemic.

The health professionals and scientists recommend social distancing and shelter-in-home for the time being to starve the virus.

Instead of this moment being this state’s, and this country’s, finest hour, we have Michigan’s right-wing to paint a picture of ignorance and privilege for the entire world to see.

Smugly flying the flag of traitors to the Union? Patriots, my ass. https://t.co/UY4mDLkgDw

The embarrassment is on multiple levels.

First, The Cult said Whitmer’s order amounts to treason. As I said recently, it’s a good thing The Cult wasn’t around for World War II when the government ordered food, sugar, gas, and other supplies to be rationed.

But The Cult is losing its collective mind because it’s being told (by a woman) to stay home to win the war against a virus. The virus is killing Americans across the country. Isn’t this the time when we’re supposed to set an example to the rest of the world? Isn’t this the time we exhibit that good-ole-can-do-spirit that makes America, well, America?

As Amanda Marcotte wrote, The Cult (or conservatism, in general) is anything but the rugged individualists they claim to be:

In reality, this pandemic has exposed how we’re all in this together and none of us are “rugged individuals.” We need those health care workers and grocery store employees and teachers. We are all dependent on each other, not just for the basic necessities of life, but the luxuries like boating and gardening. Right wingers have spent decades denying this fact, clinging to their Ayn Rand fantasies that they’re not dependent on the rest of us and are under no obligation to pay their taxes or by treating others with decency and compassion.

But it turns out that conservatives are more dependent on the system that all the people they deplore as weak, so much so that a minor interruption in their daily life causes a full-blown temper tantrum like the one we witnessed in Michigan this week. More are coming, we can be sure of that.

That leads to my second point. Some members of The Cult decided to not only wave flag featuring Dear Leader’s name, but to also fly…the Confederate Flag?

Michigan was part of the Union side of the Civil War. I was glad someone reminded The Cult of this fact during their meltdown on Wednesday: 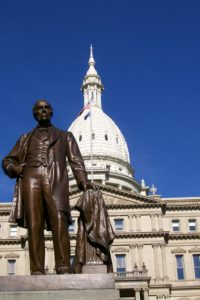 Governor Blair is known as Michigan’s “Civil War Governor.” According to the Michigan Senate’s website:

A founder of the Republican Party, he championed human rights and led the successful 1846 effort to ban capitol punishment in Michigan. He strongly supported Lincoln, encouraging men to volunteer for the war and raised money to equip them.

Governor Blair did his part in trying to save the United States of America. And these “patriots,” who can’t bear the thought of a female governor leading them through a crisis, proudly wave a flag of sedition in front of Blair’s statue.

Some may ask what kind of heritage is The Cult celebrating by waving the Confederate Flag in Michigan, which fought to preserve the Union.

But why ask? The Cult only cares about Dear Leader and their side winning.

Oh, right. And owning those stupid libs, who, like Blair, continue to fight for human rights and science, and all of those other liberal traits, like kayaking!

Yes, we’re all inconvenienced. I like to hit the bar once in awhile. And I’m sure there are some who were planning on fishing on motorized boats especially with Walleye season beginning next week.

Do you know what else sucks? The hundreds of thousands of Michiganders filing for unemployment. The pain this is causing small businesses, which once again got left with crumbs while rich corporations received billions upon billions in government handouts.

In fact, not only is the $248 billion small business fund “depleted,” the majority of those funds went to red states. Now, how did that happen?

And is $1200 really enough money for an individual who lost their job all due to the fact that Dear Leader refused to prepare for this pandemic? No, it is not!

Congressional Democratic Party leaders must figure-out a way to fight for Americans who are hurting. The Dear Leader’s the only one doing the talking. God, I feel like I’m in the middle of The American President. What I wouldn’t give to have Bob Rumson running this country right now!

The virus isn’t going to suddenly disappear. Yes, it’s going to level-off a bit, and thereby perhaps allowing states to relax some restrictions. But the idea that America’s economy is going to rebound robustly is wrong and short-sighted. People are going to be in pain for quite some time. That means government MUST fill the void, and do it quickly.

That also means expanding Medicare for the time being.

So, yes, times suck right now. There’s no getting around that.

We need to do more testing, which will help this country get back to normal! Alas, that’s not happening on the federal level. Perhaps that’s because we’ll get an accurate picture that the virus has infected more people than originally thought. Perhaps that’s why Dear Leader doesn’t want to expand testing.

Whatever the reason, expanding testing will help this country regain its footing!

But rather than acknowledge the reality, Michigan Republicans egged-on their base to blame Governor Whitmer for the current conditions, not Dear Leader.

Susan Demas notes, though, while making this call-to-arms, Michigan’s Republican Party elite were nowhere to be found during the event:

Wednesday’s raucous protest may have been an astro-turf operation (shockingly, yes, a DeVos-funded group was involved), but this was no Brooks Brothers Riot. (Sorry, for folks who are not old, that was the protest during the the George W. Bush-Al Gore 2000 debacle in Florida where snappy-suit-clad dudes demanded votes stop being counted).

Many Republican leaders and their wealthy donors didn’t show up to the one in Lansing — which pretty much tells you everything you need to know about the safety risks involved. But why put yourself and your family in harm’s way when you can outsource protesting to folks who think conspiracy king Alex Jones’ “magic” remedies will keep the evil vibes away?

Michigan’s Chamber of Commerce CEO Rich Studley has been against any kind of shelter-in-place since Day One. He backed-off once the virus started to spread, but he railed against Whitmer once she extended the order through April.

The elites called the charge, but failed to be visible on the day of battle.

And that’s too bad because since Studley, Senate Majority Leader Mike “Batshit Crazy” Shirkey, and Lee “I’m Not Allowed To Bring A Gun On A Plane” Chatfield, could’ve joined their like-minded brothers and sisters by refusing to wear masks, ignoring the six-feet social distancing rule, handing-out candy to kids, and proudly saluting both the Confederate and Dear Leader flags!

Why did they refuse to put their money where their mouths are?

You’ve got to hand it to them. With the help of some Devos cash, they got a decent crowd to show-up and demonstrate to the world that they’re willing to die for Dear Leader.

And that’s what Dear Leader and the Republican elite are counting-on this November.